You are here: Newsroom > News > Three of London’s most famous cultural institutions shine a spotlight on American art 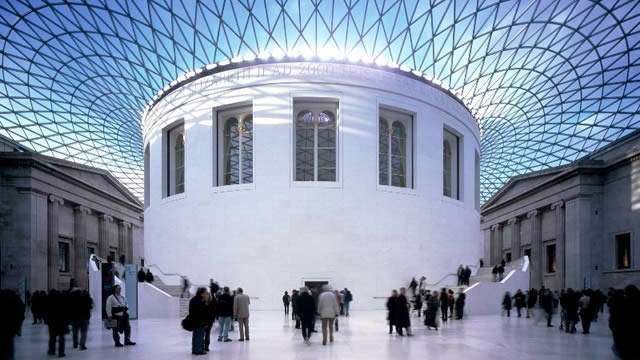 American history and culture will be at the forefront of a series of world class exhibitions due to go on display in London this year.

Over the next 12 months, five exhibitions featuring some of America’s most celebrated artists including Andy Warhol, Jasper Johns, Grant Wood, Robert Rauschenberg and Alice Neel will come to London. Many of the exhibitions will feature iconic works of art such as Rauschenberg’s Monogram 1955-59 and others which have never been seen before in the United Kingdom like Wood’s famous piece American Gothic.

The exhibitions at the British Museum, the Royal Academy of Arts and Tate Modern, will cover a range of artistic movements from the 20th century, from Regionalism to Surrealism and from Abstraction to Pop Art, and will prove a big draw for visitors to the city.

The Royal Academy of Arts’ February exhibition, America After the Fall: Painting in the 1930s, will examine how American artists’ chronicled the unsettled economic, political and aesthetic climate that dominated the decade following the Wall Street Crash of 1929. In the autumn, the Royal Academy will present a survey of one of the most influential living US artists, Jasper Johns. Bringing together the artist’s paintings, sculptures, prints and drawings, from his innovations in sculpture to his use of collage in paintings, the exhibition will give focus to different chapters of Johns’ career.

In March, the British Museum will stage The American Dream: pop to the present, an exhibition charting the creative momentum of the print across five decades of turbulent and dynamic US history. The show will include works by American greats such as Andy Warhol, Jasper Johns, Ed Ruscha, Chuck Close and Louise Bourgeois, alongside more recent works from artists such as Kara Walker, Willie Cole and The Guerrilla Girls.

Later in the year, Tate Modern’s major summer exhibition, Soul of a Nation: Art in the Age of Black Power (12 July – 22 October 2017), will explore how ‘Black Art’ was defined, rejected and redefined by artists across the US in the period between 1963 – 1983. Many works will be on display in the UK for the first time and will introduce UK audiences to American artists such as Norman Lewis, Lorraine O’Grady and Betye Saar.

Opened last month, Tate Modern’s Robert Rauschenberg, organised in collaboration with The Museum of Modern Art in New York, is the first posthumous retrospective and the most comprehensive survey of the artist’s work for 20 years. Each chapter of Rauschenberg's incredible six-decade career is represented by major international loans that rarely travel. The exhibition is open until the 2 April 2017.

Deputy Mayor for Culture and Creative Industries, Justine Simons, said: “We are so lucky to have the world’s greatest museums and galleries here in London. One of our real strengths as a city is our internationalism, and our cultural institutions consistently and brilliantly celebrate this. As well as telling the story of our own nation, they also celebrate the world’s culture, and this series of exhibitions showcasing pioneering American artists of the last 50 years is no exception. From Surrealism to Pop Art, Londoners will have the chance to see incredible 20th Century pieces, reinforcing our reputation as a global centre for contemporary culture that is very much open to the world.”

Hartwig Fischer, Director of the British Museum said: “The American Dream is an extremely exciting project for the British Museum, highlighting our extraordinary holdings of American prints and drawings. As a new President enters the White House and another chapter of US history begins, it feels like an apposite moment to consider how artists have reflected America as a nation over 50 tumultuous years.”

Tim Marlow, Artistic Director at the Royal Academy of Art, said: “The Royal Academy of Arts is delighted to be joining the British Museum and Tate Modern in exploring and celebrating some of the decisive moments in 20th century American Art. Grant Wood’s epoch-defining painting American Gothic will travel to Britain for the first time as we examine the turbulent emergence of modernism in the 1930s in America after the Fall. We are also paying homage to one of the undisputed masters of modern art, Jasper Johns, in the first major survey in London of an innovative career spanning seven decades and still going strong.”

Frances Morris, Director of Tate Modern, said: “Tate Modern’s exhibitions celebrate both the familiar and the unfamiliar - from showing a key American figure like Rauschenberg in a new light, to exploring more diverse connections between America’s art and its social history in Soul of a Nation. We are delighted our exceptional international loans allow us to bring great American works to UK audiences, many for the first time.”

The British Museum, the Royal Academy and Tate Modern are among the capital’s most visited attractions welcoming over 12 million visitors in 2015.[1]

Culture is a key driver for tourism to London, with 8 out of 10 visitors saying it is their main reason for coming to the city.[2] The exhibitions are due to go on display at a time when London offers better value than ever before for international tourists.

[1] According to Association of Leading Visitor Attractions

About the British Museum

Founded in 1753, the British Museum was the first national public museum in the world. From the outset it was a museum of the world, for the world, and this idea still lies at the heart of the Museum's mission today. The collection tells the stories of cultures across the world, from the dawn of human history, over two million years ago, to the present. Objects range from the earliest tools made by humans and treasures from the ancient world to more recent acquisitions from Africa, Oceania and the Americas, the Middle East, Asia and Europe, as well as the national collections of prints and drawings, and coins and medals. In addition to work in London, the Museum takes part in an extensive programme of loans and tours, both across the UK and throughout the world.

For more information and imagery, contact Benjamin Ward on benjamin@benjward.com

About the Royal Academy of Arts

The Royal Academy of Arts was founded by King George III in 1768. It has a unique position in being an independent, privately funded institution led by eminent artists and architects whose purpose is to be a clear, strong voice for art and artists.  Its public programme promotes the creation, enjoyment and appreciation of the visual arts through exhibitions, education and debate.

The RA is undergoing a transformative redevelopment which will be completed in time for its 250th anniversary in 2018. Led by the internationally-acclaimed architect Sir David Chipperfield RA and supported by the Heritage Lottery Fund (HLF), the plans will link Burlington House on Piccadilly and Burlington Gardens for the first time, uniting and revitalising the two-acre site. The redevelopment will also reveal the elements that make the RA unique, sharing with the public the historic treasures in its Collection, the work of its Academicians and the RA Schools, alongside its world-class exhibitions programme. For more information on the RA visit www.royalacademy.org.uk/ra250#video

America after the Fall: Painting in the 1930s (25 February – 4 June 2017) has been organised by the Art Institute of Chicago, in collaboration with the Royal Academy of Arts, London, and Etablissement public du musée d'Orsay et du musée de l'Orangerie, Paris. 2009-2017 Season supported by JTI. For tickets please visit www.royalacademy.org.uk or telephone 020 7300 8090.

For more information and imagery, contact Alexandra Bradley on Alexandra.Bradley@royalacademy.org.uk

Tate is a family of four galleries which includes Tate Britain and Tate Modern in London, Tate Liverpool in Merseyside and Tate St Ives in Cornwall. It is part of a wider network of partner institutions – the Plus Tate network – which champions the visual arts across the UK. Tate manages a growing national collection of over 70,000 works of art, acquired and cared for on behalf of the public and shown in venues throughout the country and across the world.

For more information and imagery, contact Cecily Carbone on Cecily.Carbone@tate.org.uk