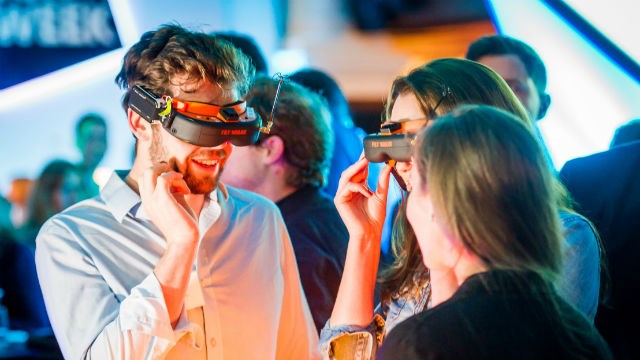 Dedicated road lanes for driverless cars, lunch delivery drones, augmented reality advertising billboards and robotic tour guides are just some of the technologies that could transform cities within the next 20 years according to a survey of more than 2,000 UK adults released ahead of London Tech Week 20171.

Technology will play a major role in transforming global cities, with the research showing that two thirds of people (67 per cent) believe that advances in driverless car technology could lead to dedicated road lanes for autonomous vehicles and more than a third (34 per cent) say they would be willing to make a journey in an un-manned drone taxi. Almost a quarter of people (23 per cent) expect cities to ban human drivers completely.

Consumer adoption rates for technologies that do not yet exist were mixed with the survey revealing that almost half of Britons would be willing to travel at speeds of over 600mph on a high-speed train, such as Elon’s Musk’s Hyperloop project. Over a third of respondents were also enthusiastic at taking a commercial space flight or commuting to work in a driverless car.

There was less appetite for dining at a restaurant serving a 3D printed meal or purchasing an underwater home. Four per cent of women would be willing to go on a date with a human like robot, compared to twelve per cent of men.

The survey, which was commissioned by the founders of London Tech Week and inspired by a series of predictions put forward by Imperial College London’s Tech Foresight group, reveals the technologies consumers think could change our global cities, disrupt traditional industries and drive forward the growth of London’s tech sector.

Professor David Gann CBE, Vice President (Innovation) at Imperial College London, said: “With some of the world’s best creative minds and leading universities, London is at the forefront of innovation. From transport and healthcare to fashion and financial services, technology is changing our cities, the way we work and our everyday lives. Through our Tech Foresight team, Imperial Business Partners is bringing together world-leading business experts, academics and innovators to envision the impact technology will have across a variety of industries. London Tech Week will shine a spotlight on the range of innovative companies and tech talent in London, as well as demonstrating the future technologies which could shape global cities such as London.”

Gavin Poole, CEO of Here East London Tech Week ambassador added: “London is brimming with a huge range of exciting tech start-ups who are leading the way in developing some of the world’s most innovative technologies such as artificial intelligence and big data. Centres of innovation like Here East provide a platform for entrepreneurs to allow them to develop their innovations, scale their business and collaborate with other businesses. These tech innovators are already disrupting entire sectors, but in years to come we will no longer silo technology into a separate category – it will integrate into our everyday lives and permeate all aspects of the industry.”

Further analysis of the survey findings show the British public are divided on the potential impact of robots on society and the workplace. Almost half of people (47 per cent) think that human productivity will be boosted by robotics, two fifths (39 per cent) say robots will have a positive impact on society and more than a quarter of people say they would trust a robot to do a job better than a human. However, nineteen per cent of people fear their job is at risk of being taken by a robot, although17 per cent of those surveyed said their job was so dull they would rather a robot did it.The research also shows that:

London Tech Week (12-16th June) is Europe’s largest festival of technology, and last year welcomed over 40,000 delegates at more than 300 separate events. Across the week, the festival will showcase the very latest innovations including drones, autonomous vehicles, artificial intelligence and robotics.

PRESS IMAGES can be downloaded HERE.

Data from the Populus research:

Populus interviewed a random sample of 2,057 UK adults aged 18+ from its online panel between 10th– 11th May 2017. Surveys were conducted across the country and the results have been weighted to the profile of all adults. Populus is a founder member of the British Polling Council and abides by its rules. Further information at www.populus.co.uk.

London Tech Week is a festival of events, taking place across the city and representing the entire technology ecosystem. No other festival of live events brings together as many domestic and international tech specialists and enthusiasts to London for such a variety of networking, social, learning and business opportunities.

Since its launch in 2014 London Tech Week has included more than 700 events and has welcomed delegations from around the world. London Tech Week 2017 will be organised by founding partners, KNect365, London & Partners and Tech London Advocates, with support from strategic partners Tech City UK, ExCeL London, DIT and techUK.

About Imperial Tech Foresight As part of Imperial College London, Imperial Tech Foresight brings together world-leading academics and business leaders to offer challenging, provocative and personal visions of the future. On 14th June, Tech Foresight and the Imperial Business Partners corporate membership programme will jointly host its annual showcase event will look forward 20 years to explore the future of science and technology in areas such as computing, robotics and energy networks.