You are here: Newsroom > News > Olympic boxing qualifier to return to London in April 2021

Olympic boxing qualifier to return to London in April 2021 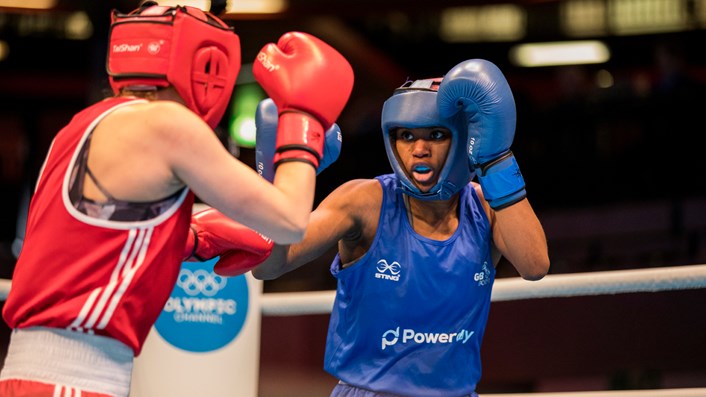 The Boxing Road to Tokyo European Olympic qualifying event will return to the Copper Box Arena on the Queen Elizabeth Olympic Park in London from 22 – 26 April 2021.

The original event in March 2020 was suspended after three days of competition due to the Coronavirus outbreak.  The re-scheduled event will take place under Covid safety protocols set out by the UK Government and the IOC Boxing Task Force (BTF) and is expected to be held behind closed doors without spectators.

It will resume where the first event left-off and be based on the original draw made in March 2020.   176 boxers from across Europe remain in the competition which will be held across eight men’s weight categories and five for women. 50 qualification places are available for the men and 27 for women.

The event will be delivered in association with a range of local partners including The Mayor of London, UK Sport, the British Olympic Association (BOA), GB Boxing, the Queen Elizabeth Olympic Park and London & Partners.

The Mayor of London, Sadiq Khan, said: “London is the sporting capital of the world and it’s fantastic that our city will host Europe’s best boxers as they compete for a place at the Tokyo Games. I hope this is just the start of world-class live sporting events returning to London.”

The news that the event is set to return to London was welcomed by GB Boxing’s Performance Director, Rob McCracken.  He said: “It is very rare that our boxers get to compete in the UK and they were looking forward to the original event so it was a big disappointment when it was suspended before the majority of the team had the chance to box.

“The news that the event is returning to London is great for the team.  After a period of uncertainty it has given all of the boxers a goal to aim towards and we will be working hard to make sure they are in the best possible shape when the qualifier starts again next year.”

A team of 13 boxers from the GB Boxing squad was originally selected to compete in the event.  12 remain in the competition and two boxers, flyweight, Galal Yafai, and featherweight, Peter McGrail, have already secured qualification for Tokyo 2021.

The pair will continue to compete in the re-scheduled event and aim to progress as far as possible as performances at the qualifier will influence seeding at the Olympic Games in 2021.

One boxer who will be making her debut in the competition is the reigning middleweight world champion, Lauren Price.

Price said: “This is fantastic news for all of us in the GB Boxing team.   The first event being suspended before many of us, including myself, got the chance to box was a massive disappointment.  I went into the original qualifier on the back of a great run of form and my preparation had been excellent, so it was a blow when the event was stopped, although we soon realised it was the only option in the circumstances.

“Having confirmed dates for the re-scheduled event and knowing it is coming back to London is great news and has given all of the boxers a boost.  Even without spectators, having the event on home soil is good news and means we don’t have to travel as much and will be competing in a familiar environment.”

The re-scheduled Boxing Road to Tokyo tournament is due to take place over five days through several rounds of competition including preliminaries, quarter-finals, semi-finals and finals.  In weight classes where five or six places are available, there will be Box-Offs to determine who qualifies.

The weight classes and the number of qualification places available in each category are:

Although boxers will secure qualification for Tokyo at different stages in the tournament (depending on how many places are available at their weight class), the competition will continue through to medal stages and a final in all 13 weight classes as performance at the Boxing Road to Tokyo qualifying events will impact on the seeding of boxers at Tokyo 2021.

Commenting on the BTF’s decision to return the event to London, UK Sport’s Acting Deputy Director of Major Events, Esther Britten, said: “The announcement of the Boxing Road to Tokyo Olympic qualifying event being rescheduled for London in April is a great first step as we look to get back to hosting major international sporting events that will help British athletes qualify and prepare for Tokyo next year.  We thoroughly enjoyed working with the BTF earlier this year and, along with the Mayor of London, GB Boxing, the BOA and Queen Elizabeth Olympic Park are very much looking forward to doing the same again.”

Georgina Warren, Head of City Events and Experience at London & Partners, which runs www.visitlondon.com added: “We are delighted that the Boxing Olympic qualifying event is returning to the capital in 2021. London’s East End has a strong boxing heritage and so it feels right for the tournament to take place in the Copper Box Arena in our own Queen Elizabeth Olympic Park to the east of the city, merging London’s past sporting history with the new.

“Sporting events are more important now than ever before given the role they play uniting and inspiring fans from all over the world.  We can’t wait to welcome boxers from across Europe to London for this thrilling event.”

The Copper Box Arena is part of the legacy of the London 2012 Olympic and Paralympic Games.  It was used for the handball preliminaries and modern pentathlon fencing during the Olympics and for goalball during the Paralympics.  Since 2012 it has hosted a number of national and international sporting events including basketball, badminton, netball, table tennis, wrestling and boxing.

Further information about the event including the competition structure, the qualification process, the competition draw and results to-date are available at www.boxingroadtotokyolondon.org.

Boxing Road to Tokyo in London

Boxing Road to Tokyo in London is a BTF event which is supported by funding from the National Lottery and The Mayor of London and will be delivered in association with a range of partners including UK Sport, GB Boxing, the British Olympic Association (BOA), the Queen Elizabeth Olympic Park and London & Partners.

It is one of two opportunities for boxers from Europe to seal a place at the Tokyo 2020 boxing tournament. The second opportunity will be at a final Boxing Road to Tokyo World Qualification Event in 2021.

Further information on the event including details of the qualification system and the schedule for the event is available at www.boxingroadtotokyolondon.org.

Elite sport - return to cross border competition guidance and guidance from the BTF.

Both the LOC’s Chief Medical Officer and a Covid Officer will have oversight of the measures and mitigations that will be put in place to ensure the event is delivered in a Covid secure environment.

The LOC will take advice from Public Health England and maintain regular liaison with the venue, the local authority and it’s Director of Public Health.

Measures will be put in place to ensure all accommodation providers comply with the guidance provided and have systems in place to control infection and deliver clean, Covid-secure living spaces.