You are here: Newsroom > News > London’s iconic West End presents untapped opportunities for Asian investors and brands in the retail sector to thrive and grow 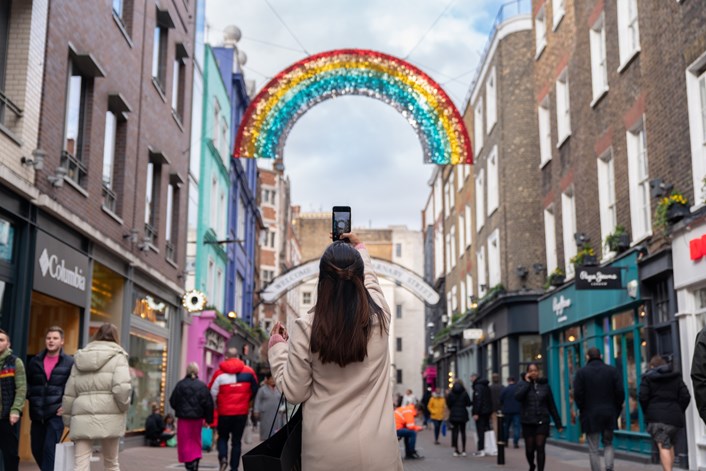 New investment data from London & Partners, the business growth and destination agency for London, shows that London is the leading global city for international retail businesses. Over the past five years, the UK capital has attracted a total of 460 retail trade inward investment projects: significantly more than any other destination city, ahead of Paris (256), New York (249) and Singapore (188). London attracted more inward investments than any other global city between 2020 and 20211.

Global businesses are reaping the returns of investment in the market, with the majority coming from the US and European countries which take up the top 10 source countries for retail expansion into the capital. Japan is the only Asian market to claim a spot among the top 10, ranking at joint ninth place with Denmark, while South Korea and Hong Kong rank 24th and joint 26th place respectively, demonstrating an untapped potential for retail businesses from Asian markets to expand their footprint in London.

London is an attractive destination for Hong Kong businesses across all sectors, with 41 inward investment projects worth a total of £1.14 billion coming from the country between 2016 and 2021. Furthermore, the new data shows that London has seen more retail trade inward investment over the past five years than Hong Kong, Tokyo and Seoul combined. London can offer substantial growth potential for Asian brands outside of the Asian market, especially those offering concepts in consumer sectors, such as food & beverage, retail, leisure, arts, culture and entertainment, which contribute to the globally diverse consumer offerings found in London that attract millions of high spending visitors each year.

London’s iconic West End is a major draw for overseas consumer businesses, with the district attracting 200 million visitors a year and an annual spend of £10 billion pre-pandemic. The area is home to over 250 flagship stores, with presence of well-known consumer brands from Asia including Uniqlo, Onitsuka Tiger, Din Tai Fung and Samsung. There is now a unique window of opportunity for exciting and cutting-edge consumer-facing businesses to be part of the West End’s future story, as highly coveted retail space has become uniquely available post-pandemic, in well-known districts such as Oxford Street, Regent Street, Soho, Bond Street, Piccadilly and Covent Garden.

Success stories of some of the consumer businesses with Hong Kong influence include that of Dumplings Legend, a restaurant based in Soho, founded by Hong Kong-born Geoff Leong. Calvin Hui and Mark Peaker, the founders of 3812 Gallery opened their flagship London location in 2018, which through thoughtfully curated art programmes aims to foster cultural understanding of Chinese contemporary art. Looking ahead to 2023, the city eagerly awaits the opening of iconic Hong Kong hospitality brand The Peninsula new hotel: The Peninsula London in the heart of Belgravia.

Calvin Hui, Co-founder of 3812 Gallery in Hong Kong and London, said: “London’s West End was a natural choice for us as the first place to expand 3812 Gallery. It has an unrivalled arts and culture scene and locating there has truly helped us establish international growth. We’ve been greatly impressed with the interest of Hong Kong artistic influences from our London audience and its international visitors, but also have felt right at home in the city, because of the rich ties the UK has with Hong Kong. There is a very established Hongkongese culture in the West End, so Hong Kong brands, whether in fashion, food or culture, will do well there.”

Laura Citron, CEO at London & Partners, said: “This new data offers further proof that London is a world class consumer destination, offering a multitude of opportunities for international investors looking to expand outside of their home market. The easing of restrictions has led to growing demand from consumers to get out and explore the city, so there’s never been a better time for Asian brands to snap up highly sought-after retail spaces and increase their customer base.

“Home to world class retail stores, theatres, restaurants and cultural attractions, London’s West End has a huge amount of untapped potential for Asian businesses. From retail giants like Uniqlo to international entertainment brands like Sony, we’ve already seen how Asian brands have achieved great success in our city. London is open for business and we look forward to helping more Asian brands to maximise their growth opportunities in the UK capital.”

The future looks bright for London’s West End with growth expected to rocket to an annual turnover of £11.4 billion by 2025, superseding pre-pandemic levels by 14 per cent. Short term forecasts predict turnover in the district will reach £8.6 billion this year and will recover to its historic annual figure of £10 billion within the next two years. The West End is one of London’s most visited areas, and footfall in the district is already at 84% of pre-pandemic levels. Development in the area will be given a further boost, with a £5 billion capital investment planned over the next five years.

For Asian consumer brands considering expansion to London, a free of charge and confidential service is available from London & Partners, the city governmental business growth and destination agency, who can support in all areas of expanding to London and connect brands to West End property owners to help them find prime retail space.