You are here: Newsroom > News > London looks to strengthen tech trade and investment links with US

London looks to strengthen tech trade and investment links with US 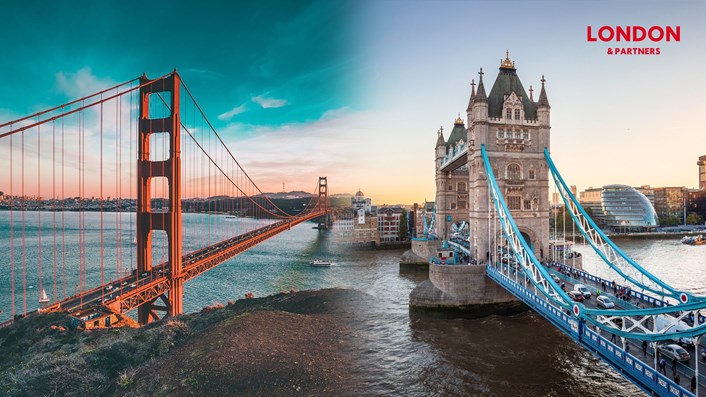 Tech trade and investment between London and the United States continues to grow from strength-to-strength, with fresh foreign direct investment data showing that London is the number one destination globally for US tech companies looking to expand outside of their home market. The research has been released to coincide with the Mayor of London’s trade mission to the US where he will meet with senior tech bosses, investors and entrepreneurs from the Bay Area to promote even stronger tech links between the two regions.

Over the past few years, a number of leading US tech companies have made long term commitments to London with the likes of Facebook, Google, Apple, Netflix, Amazon, Microsoft, LinkedIn, Snap and Stripe all growing their workforce and expanding their office space in the UK capital.

The Mayor of London Sadiq Khan will be meeting with tech investors and entrepreneurs in Silicon Valley and San Francisco to secure more trade and investment deals for the UK capital. Sadiq will visit the Silicon Valley headquarters of Plug and Play, the world’s largest early-stage investor and a global innovation platform, who have announced that they will be setting up their first UK operations in both London and Warwickshire. Through partnerships with leading UK brands – including founding partners Jaguar Land Rover and BT Group – Plug and Play will build and run innovation programmes rooted in collaboration between corporates and startups. Plug and Play also aims to make up to 30 investments per year into UK early-stage start-ups.

Sadiq will also meet with Faire, a leading San Francisco based online B2B retail marketplace that continues to expand its presence in London, following the opening of its international headquarters in the UK capital last year. The company currently employs over 170 staff in London and is growing rapidly in Europe following a $400m funding round last November which raised its valuation to $12.4bn. Additionally, Palo Alto based artificial intelligence software provider and unicorn, SambaNova Systems, has announced its expansion in the UK with the opening of its first London office over the coming months.

The Mayor will also speak with senior representatives from some of the world’s biggest tech companies, such as Google, to encourage further investment and partnerships. This includes a meeting with Google CFO Ruth Porat. Google recently announced a $1 billion investment in its Central St Giles office which, alongside its growing campus at King’s Cross, will create capacity for 10,000 UK employees.

The Mayor of London, Sadiq Khan said: “I’m delighted to be in Silicon Valley today to bang the drum for even more investment in London by American tech companies.

“London is already the number one destination for American tech companies to expand, showing we are an unrivalled destination in Europe for US businesses to invest. It is great news that even more leading US tech companies have unveiled plans to invest in and create new jobs in London, and I encourage businesses from across the sector and beyond to set their sights on London.”

Ruth Porat, SVP and CFO of Google and Alphabet, said: "Google has been committed to the growth and success of London through investments in our local offices, employees and R&D since we first opened our offices in London in 2003. Google shares the Mayor’s belief in the power of technology to drive sustainable economic growth, and we look forward to continuing to deepen our connection to the capital in the years ahead.”

Saeed Amidi, CEO and Founder of Plug and Play, said: “As a global hotspot for innovation and home to a strong network of entrepreneurs, the UK has the potential to be one of Plug and Play’s biggest Innovation Platforms. London is one of Europe’s leading technology hubs – making it a natural place for us to setup our first UK operation. We see lots of similarities between London’s thriving start-up ecosystem and our original home in Silicon Valley and we look forward to exploring investment opportunities into cutting edge companies based in London and the rest of the UK.”

Ed Couchman, General Manager, Snap UK said: “There's no question London is a global hub for creativity, tech innovation and talent - that's why it's been home to our UK team for some time. Some of our most exciting and creative Augmented Reality innovation is built right here and we continue to welcome a wealth of talent to our growing UK team."

Over the past five years, the Bay Area has dominated the tech investment landscape, receiving over $327.9bn worth of venture capital funding between 2017-2021, including a record $121.3bn in 2021. It is currently home to more unicorn tech companies than any other hub in the world – with 524 companies valued at over $1 billion2.

London’s tech sector is also showing strong growth, attracting $66.1bn in venture capital between 2017-2021, almost three times the amount of total funding received by other tech hubs such as Paris ($22.5bn), Berlin ($22.9bn) and Tel Aviv ($18.9bn). 2021 was an unprecedented year for investments into London tech companies – with the UK capital’s tech firms seeing a record $28.1bn in funding, over double any other European city.

During his visit to the Bay Area, the Mayor will also meet with leading VC investors from the region to encourage them to explore investment opportunities in London. US venture capital investors are showing a strong appetite for investing in London tech, with the research showing that the US is now the largest source market for venture capital investment into London, accounting for 36% of all investment into London in 2021. A number of leading US VCs have recently setup new funds and offices in London including Sequoia Capital, Lightspeed Ventures and Index Ventures.

According to further analysis from the research, London and the Bay Area are natural partners for collaboration across a number of high growth tech sectors. The report shows that London and the Bay Area are the top two global hubs for fintech between 2017-2021. So far this year, London has attracted more fintech investment than any other global tech hub, with $5.3bn raised. The Bay Area has also had a strong quarter for fintech funding, ranking second globally, with $5.2bn raised between January and April 2022.

Throughout his visit to the Bay Area, the Mayor will be calling for stronger tech collaborations between London and leading US tech hubs such as Silicon Valley. Sadiq has been invited by Stanford University’s Graduate School of Business to take part in a guest interview series with undergraduate students, where he will discuss how global tech hubs can lead the way in making our cities greener and fairer through developments in technology and innovation.

The US is also an attractive market for ambitious London tech companies looking to expand globally, with London & Partners data showing that the US is the top overseas destination for London companies wanting to setup an operation outside of the UK.

The Mayor will be joined on his visit to the Bay Area by 11 founders from some of London’s high flying women-led tech companies, who are looking to explore investment and expansion opportunities in the US market. The Mayor will open doors for the founders in support of London & Partners’ BeyondHERizons programme, dedicated to helping create more growth opportunities for female founders. On the next leg of his trade mission to Los Angeles, the Mayor will help some of London’s fastest growing creative technology businesses explore export opportunities, as part of the Mayor’s International Business Progamme.

Laura Citron, CEO of London & Partners said: “This research offers further proof that London and Silicon Valley are two of the world’s leading hubs for innovation and technology. It also shows that there are lots of opportunities for collaboration between the two ecosystems, especially in areas of mutual strength such as fintech, health tech and climate tech. We’re delighted to see that London is the top city for US tech businesses looking to expand outside of their home market and we look forward to strengthening tech partnerships between London and US tech hubs during this trade mission.”

Chris Kenny, General Manager, EMEA at SambaNova said: “With London having firmly established itself as a global AI leader, we are excited to be enhancing our UK presence in the financial capital of the world with our office opening in the coming months. SambaNova is rapidly supporting organisations and businesses in the UK to compete by becoming early AI enabled adopters, helping organisations in financial services, healthcare, manufacturing and the public sector quickly leverage AI for business advantage.”

Olivier Buffon, Head of International, Faire, said: “The United Kingdom is home to one of the world’s most unparalleled entrepreneur communities, and London in particular represents one of the most diverse and talented candidate pools. Our London office, which has grown to over 170 employees in a year, collectively speaks more than 15 languages. Expanding our presence in the region has unlocked our ability to serve our customer community throughout the United Kingdom and Europe, and further our mission of empowering small businesses across the globe.”

Kate Jillings, co-founder ToucanTech, a London CRM software company travelling on the female founder trade mission added: “London is in our blood - there are few places in the world that we could have built such a diverse and capable team, with the combination of tenacity, tolerance and tech skills. We're thrilled to be part of this female-founder trade mission to the Bay Area, a location like London where funding, talent and customers convene. We're looking forward to an intense 3 days of filling our brains and phones with new connections and fresh ideas.”