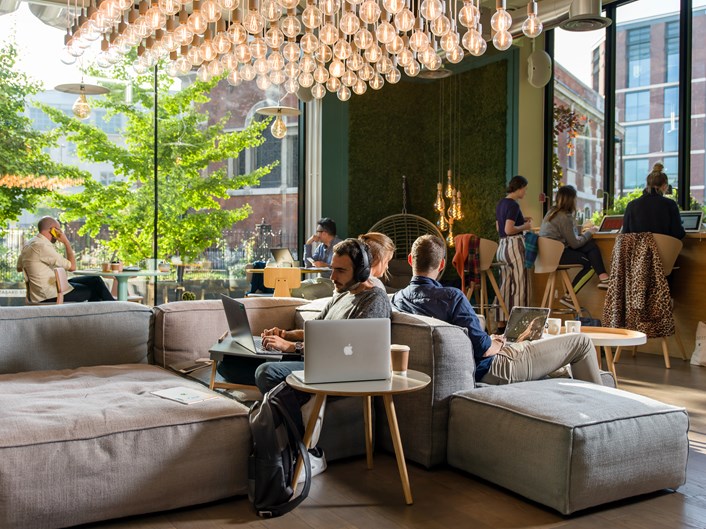 London is in the midst of a coworking boom with new data revealing that the UK capital has seen more new coworking space openings than any other city in the world this year.

According to latest data from CoworkingResources, 48 new workspaces have opened in London since the beginning of 2019, more than New York (32) and Berlin (17).1

The rise of coworking spaces is a global phenomenon, with 1,688 spaces estimated to open worldwide in 2019 alone.2 New York and London continue to dominate the worldwide market, accounting for 22% of global coworking stock between them and taking the top spots for the most coworking spaces in the world.3

Some of the biggest and most innovative coworking brands have chosen London with an average of five spaces opening every month.

From women-only spaces designed for female entrepreneurs to coworking hubs which have their own yoga studios, meditation pods and recording studios, the variety and quirkiness of London’s coworking scene has made it an attractive destination for some of the world’s leading workspace providers and designers.

The growth of coworking spaces in London has coincided with the city’s ever-growing start-up scene. Since 2010, London has created 17 unicorns and its start-up ecosystem is home to some of the Europe’s most successful companies.

London is also at the forefront of some of the global coworking markets biggest trends, with a number of unique spaces choosing the UK capital as a place to try out new ideas and concepts.

The wellbeing of members is high on the list of priorities for coworking space providers, with a number of companies making it their USP. For example, in-house nutritionists are available at Uncommon, as well as drop-in meditation studio to ensure members live well, work well and do well. Huckletree membership includes hip hop yoga classes and babysitter bookings.

Other spaces seek to attract industry-specific professionals and provide a place for like-minded entrepreneurs to network and share ideas. Industry niche spaces include: Canary Wharf’s, Level39, a fast-growing hub for fintech and cybersecurity companies, Clean Prose which offers wordsmiths a dedicated workspace to write and Sport Tech Hub, a centre designed for companies driving innovation in physical activity and sport.

There has been a recent shift amongst larger more established corporates such as HSBC and Grant Thornton who have taken out office space in flexible workspaces, in addition to their traditional offices. Tech giants have also looked to establish their own incubator spaces offering in-house office space and mentoring. These include Facebook’s first ever accelerator, LDN_LAB, and Google Campus, which offers a range of workspaces for its 22,000 members.

This significant growth in London’s coworking stock also contributes to forecast predictions that flexible workspace will account for at least 5.5% of total office stock in Central London by the end of 2019, three years ahead of previous forecasts.4

Laura Citron, CEO at London & Partners said: “We are seeing a global trend towards coworking spaces because they provide the flexibility, networking opportunities and sense of community that entrepreneurs crave. London is at the forefront of the coworking revolution because we are home to world class talent, a thriving start-up community and a strong culture of collaboration and innovation. London’s vast range of coworking spaces are home to companies from all over the world and are an important part of the city’s fast-growing, diverse business ecosystem.”

Sharon Fulton, Director at Clean Prose added: "With its booming co-working culture, London is the perfect city to host a unique environment for writers. It has a vibrant community of writers from the literary, publishing, television, film, theatre, digital, and journalism industries, which makes London a natural fit for a co-working space focused on the needs of professional writers seeking a support network and a friendly environment. From bespoke writing desks to a soundproofed coffee grinder, everything at Clean Prose has been tailored to respond to the specific needs of London's writing community."

Tania Adir, Co-Founder of Uncommon said: “Uncommon is all about providing a space that enhances productivity and creativity in an environment that is healthy and flexible. Our focus is on wellbeing and so you’ll see we have thousands of plants, a huge ficus tree and dedicated areas to allow for focus, creativity, meetings and relaxation. Moving forward, we will continue to grow our freehold model, throughout London & Europe.”

Some of London’s recent openings and quirkiest coworking spaces include:

The Wing opened their highly anticipated London community space last week, marking their first expansion outside of the US. Quickly becoming one of the world’s most influential female networks, their newest location features unique London amenities such as a full-service tea parlour, fitness rooms with Peloton bikes, a rooftop terrace and a portrait gallery featuring commissioned works of acclaimed British women.

The AllBright, Rathbone and Mayfair

London’s first women-only member’s club The AllBright opened its second London location this year, followed by its first club Stateside. Members benefit from access to networking events, in-house career coaching and acceptance on the AllBright Academy programme which aims to equip women with the skills and tools to achieve their career ambitions.

Fora added to their seven existing spaces with the opening of their latest workspace in London’s Soho this year. Their spaces aim to disrupt coworking by emphasising flexibility and productivity. Members are on a rolling 30-day contract, can use the Fora app to book meeting rooms and discover events, and even have access to the Fora podcast recording studio.

London’s first coworking space exclusively for writers has recently emerged onto the scene, aiming to provide a peaceful environment to work as well as a network for professional wordsmiths. The three-floor space in Old Street features one floor specifically for workshops and writing-focused events, another for eating and networking and a further soundproofed space to write and concentrate. Even the coffee grinder is soundproofed so as not to disrupt the writers’ flow!

Southwark-based coworking space, The Ministry, attracts London’s brightest music professionals with its four floors of office space, soundproofed recording studio, 70-foot bar and yoga classes. There is even a tequila bar in the ladies bathrooms. Launched by celebrated brand Ministry of Sound, the workplace emphasises the importance of excellence in sound, with DJ Tom Middleton crafting psychoacoustics designed for productivity, relaxation and wellness.

Next-door to London’s famous Borough food market, the Uncommon workspace places a big emphasis on health and wellbeing. Members can take advantage of its drop-in meditation studio with meditation pods designed by Inhere, yoga classes and an in-house nutritionist. The workspace also hosts special cocktails nights on its rooftop space with amazing views over the city.

With an emphasis on practical and creative work, Makerversity offers studio space to the likes of designers, inventors, craftsmen and engineers. Based in London’s iconic Somerset House, the workspace provides members with access to a range of innovative tools including a laser cutter, 3D printers, and an industrial sewing machine to bring their ideas to life.

With 5 locations across London, including a space in MI6’s former London headquarters, Huckletree prides itself on bold and bright aesthetics for its workspaces. Members can benefit from some quirky perks including hip hop yoga classes, babysitter bookings and play rooms.

With 40,000 square foot of workspace, The Food Exchange at the New Covent Garden Market is a first-of-its-kind co-working space for food entrepreneurs. Based at the new Nine Elms development, it has three floors, housing the UK’s largest shared kitchen, alongside private studios and a rooftop terrace with space for more than 130 food businesses to work and innovate.

CoworkingResources is a publication dedicated to providing comprehensive, unbiased guides and industry studies for coworking space owners, operators, and stakeholders. With over 45,000 monthly subscribers, our mission is to provide quality tools and expert insights for those seeking to plan, open and scale flexible workspaces. Find out more: https://www.coworkingresources.org/

Cushman & Wakefield is a leading global real estate services firm that delivers exceptional value for real estate occupiers and owners. Cushman & Wakefield is among the largest real estate services firms with approximately 51,000 employees in 400 offices and 70 countries. In 2018, the firm had revenue of $8.2 billion across core services of property, facilities and project management, leasing, capital markets, valuation and other services. Find out more: www.cushmanwakefield.com