Mayor of London
You are here: Newsroom > News > London entices U.S. visitors with the launch of the city's largest ever international tourism campaign

London entices U.S. visitors with the launch of the city's largest ever international tourism campaign 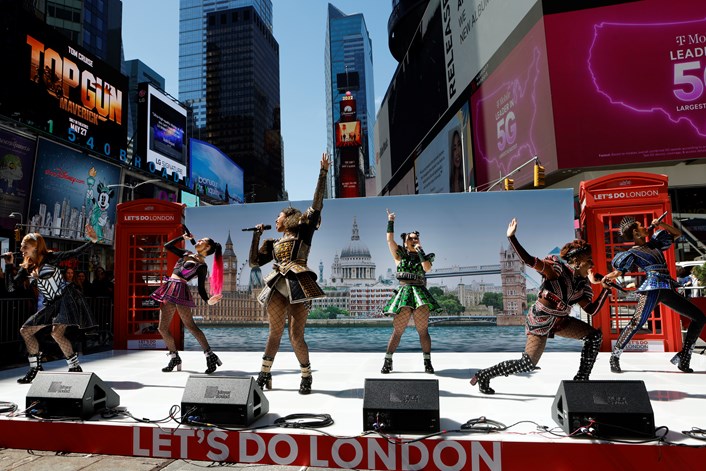 LONDON CALLING! THE ROYAL CELEBRATIONS ARE PLANNED, THE FLOWERS ARE IN BLOOM AND THE CITY IS BUZZING WITH A RENEWED ENERGY; NOW IS THE TIME TO VISIT LONDON

London Mayor Sadiq Khan was joined by the cast of the hit British musical SIX, and the iconic Coldstream Guards this morning in New York to launch London’s largest ever international tourism campaign following the lifting of US-UK travel restrictions. The $12.5m “Let’s Do London” campaign was launched by Mayor Khan with a spectacular London themed takeover of Times Square, as he called for US visitors to put London at the top of their travel bucket list.

In celebration of The Queen’s Platinum Jubilee year, London’s Times Square moment brought all the pomp and ceremony of the royal city, halting New York traffic with a formal presentation of the Coldstream Guards, installation of the iconic red phone booths and a vintage black London cab to officially kick-off the campaign in the States. New Yorkers and tourists alike were dazzled by a surprise performance by the cast of SIX, singing and dancing to a medley of “Ex-Wives” and the title song “Six” from their award-winning musical that is currently playing on Broadway and London’s West End.

Led by London & Partners, which runs Visit London, the new “Let’s Do London” campaign aims to motivate US and global travelers to choose London for their next trip by shining a spotlight on the city’s diverse range of attractions, exhibitions, and events taking place this year. Prior to the pandemic, the US was London’s largest market for tourism, helping to make it third most visited city on the planet. Tourism accounts for as many as one in five jobs in London and contributes almost 12 per cent of the city’s gross domestic product.1

2022 is a momentous year for London, with the return of major events including the 50th anniversary of Pride in London, the Notting Hill Carnival and the unveiling of Big Ben since it underwent renovation in 2017. Visitors will also be able to join the crowds at sporting events, with the return of the NFL London series and London’s first Major League Baseball Home Derby X global tour event. London will also host the UEFA Women’s EURO football championship at Wembley and the world-famous Wimbledon tennis championships. Music lovers can experience performances from Adele, Elton John and the Rolling Stones at Hyde Park and the all-new ABBA Voyage concert opening at a custom-made theater in the Queen Elizabeth Olympic Park.

There will be a summer of world-class visual art for Londoners and visitors to see up close including blockbuster art exhibitions, such as Picasso Ingres: Face to Face at the National Gallery, Surrealism beyond Borders at Tate Modern and Edvard Munch at The Courtauld Gallery. This month also sees the opening of London’s first LGBTQ+ Museum in Kings Cross. Stars of the screen including Mark Rylance, Amy Adams and Beverly Knight tread the boards of the West End’s famous theaters, while Shakespeare’s Globe plans a series of special events to celebrate its 25th anniversary. The Elizabeth Line, a new Underground line from east to west London, is also due to open on May 24th, giving visitors a new high-speed route across the city.

Latest insights from Tripadvisor revealed the top ten attractions US travelers are currently searching for when planning their bucket list for a trip to the UK capital – these include iconic landmarks such as Tower of London, Buckingham Palace, Tower Bridge and the London Eye2. US travelers are also searching for information about London’s famous food market, Borough Market, and one of the city’s most visited museums, the British Museum. Additionally, the Harry Potter Tour at Warner Bros. continues to excite US audiences, an attraction that has long fascinated film fans, which has only increased with the release of the third installment of the “Fantastic Beasts” series. The city continues to grace the screens in both hit movies and top TV shows such as “Bridgerton” and “Ted Lasso.”

Speaking in Times Square this morning, the Mayor of London, Sadiq Khan said: “New York and London are global cities united by our energy, innovation and constant evolution. I can think of nowhere better to launch this exciting campaign to encourage our American friends to return to our great city.

“There are so many great things to see and discover in London this year – from exhibitions, plays and restaurants, to sporting events, concerts and historic attractions. As we continue to recover from the pandemic, I’m delighted to be here in the US to say loud and clear that London is once again ready to welcome visitors from around the world.”

Laura Citron, CEO at London & Partners, which runs Visit London, said: “London is the place to create memories in 2022 – from once-in-a-lifetime royal celebrations for Her Majesty’s Platinum Jubilee, to amazing experiences like ABBA Voyage – catch them while you can! In London you can visit the iconic sights, shop in our bustling boutiques and markets, relax in the cutest cafes and pubs, see incredible live shows and discover local hidden gems around every corner. Londoners are ready to welcome our guests from the US with open arms.”

Hamish McVey, British Airways Head of Brand and Marketing, said: “As the airline that connects Britain to the world and the world to Britain – we are proud to fly the Coldstream Guards to New York and be part of the “Let’s Do London” campaign. This summer we will be flying from 26 cities across the US to London, and we look forward to welcoming our customers back on board to enjoy all that our great capital city has to offer.”

The producers of SIX, comprised of Kenny Wax, Wendy & Andy Barnes, and George Stiles of London, and Kevin McCollum of New York, said: “We are delighted to be a part of today’s “Let’s Do London” campaign launch. SIX is a global phenomenon playing to sold out houses in New York and London; a shining example that Broadway and the West End are a vital part of what makes each city unique; and the producers’ partnership is a testament to the power of successful collaboration when two great cities come together.”

The “Let’s Do London” campaign is estimated to reach over 43 million individuals in the U.S. via several channels, including video on demand, YouTube, social media, display and out-of-home advertising. The campaign will run alongside the Mayor’s ongoing domestic marketing campaign, which has already brought in an additional $101.8 million in spending and 330,000 visitors to the capital.

For additional destination and travel information, please go to VisitLondon.com.

ABOUT LONDON AND PARTNERS AND VISITLONDON.COM

Visitlondon.com is the official visitor guide to London and is run by London & Partners, the business growth and destination agency for London. Our mission is to create economic growth that is resilient, sustainable and inclusive.

Visitlondon.com is a comprehensive resource for everything that is happening in London. At any one time, this includes 20,000 event listings, plus content designed to inspire and assist visitors. Visitlondon.com is available in English, French, Italian, German and Spanish. Each month, visitlondon.com attracts more than 3.5m visits and its social media channels have 1.75m followers. For more information, go to visitlondon.com.

ABOUT THE LET’S DO LONDON CAMPAIGN

The domestic Let’s Do London promotional campaign, launched in May 2021, has generated an additional £70m in consumer spending to London’s economy to date. It has also seen significant increases across visits, intent to visit London and confidence in visiting the capital amongst those who are able to recall the campaign.

ABOUT THE COLDSTREAM GUARDS

Renowned for their discipline and courage, Coldstream Guardsmen are dual role infantry soldiers: as well as ceremonial duties protecting the Monarch, they specialise in light role operations: performing reconnaissance, operating machine guns and mortars, and engaging enemy troops on foot and in light vehicles.

As well as operational frontline troops in the British Army, they have a vital ceremonial role too as part of Her Majesty The Queen’s Household Division. They, together with the other four Foot Guards Battalions, provide The Queen’s Guard at the Royal Palaces of Buckingham Palace, St James’s Palace, Windsor Castle and The Tower of London, protecting the Sovereign, members of the Royal Family resident in the Palaces, and the Crown Jewels. They are a huge draw for tourists when they handover duties from one regiment to the other at the ceremony of Changing of the Guard at Buckingham Palace.

ABOUT SIX: THE MUSICAL

Divorced, beheaded, died, divorced, beheaded, survived. From Tudor Queens to Pop Princesses, the SIX wives of Henry VIII take the mic to remix five hundred years of historical heartbreak into an exuberant celebration of 21st century girl power! The female cast is backed by an all-female band, “The Ladies in Waiting.” The New York Times says SIX “Totally rules!” (Critic’s Pick) and The Washington Post hails SIX as “Exactly the kind of energizing inspirational illumination this town aches for! The Broadway season just got supercharged!” www.SixOnBroadway.com