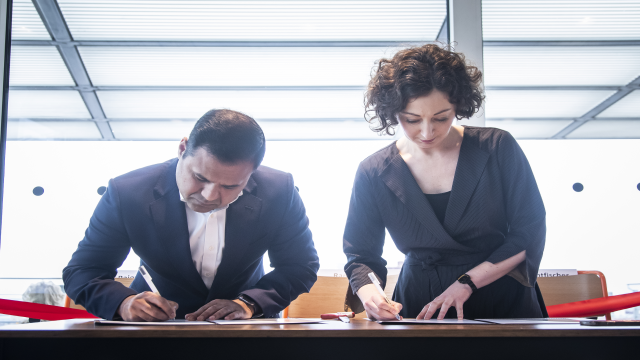 London and Berlin have today announced a new city-to-city partnership to promote greater trade and investment between the two capitals.

The landmark agreement will see the two cities economic development agencies, London & Partners and Berlin Partner, work together to help companies and do business across both regions.

The two cities have pledged to improve business ties with a focus on providing support for scale-up companies and greater collaboration in areas such as Fintech, Big Data, Internet of Things (IoT) and creative industries.

The new partnership will see businesses from both cities benefit from greater access to trade missions, investors and introductions to corporate partners to help with office space, recruitment, legal services and other tailored advice for companies looking to setup up or expand their operation in each city.

Germany is an important market for trade and investment with London and the UK. It is the fourth largest source of foreign investment into London, with German businesses creating over 4,700 jobs in the city over the past five years1. Some of the largest German companies to invest in London over that time period include engineering giant Siemens, Deutsche Bank and Lidl1.

Berlin is also an increasingly attractive destination for London companies looking to expand into Germany and mainland Europe, with latest data showing the UK capital was the number one source city for foreign direct investment into Berlin over the past five years2.

The office was officially opened today by Rajesh Agrawal, who has also travelled to Berlin for a series of meetings with senior business leaders and politicians. During his visit he will meet with Senator Frau Ramona Pop and chair a roundtable with German business leaders to reassure them that London remains open to business and collaboration with European cities such as Berlin.

Rajesh Agrawal, Deputy Mayor for Business and Chairman of London & Partners said: “London and Berlin are two of the world’s leading hubs for technology, innovation and creativity. We see lots of opportunities for collaboration, especially in fast growing areas such as fintech and smart cities. Today’s agreement with the city of Berlin and the opening of our first office in Germany demonstrates London’s desire to work with likeminded, outward looking business hubs. Brexit or no Brexit, we want to show the world that London is open for business, talent and investment from across the world.”

Deputy Mayor of Berlin and Senator Economy, Energy and Enterprises, Ramona Pop, said: "The UK is one of Berlin's most important economic partners. Brexit presents us all with difficult challenges and makes a close collaboration between Berlin and London all the more important. As growing capital cities, both face similar urban challenges. The partnership between Berlin and London will be to the economic advantage of both. In particular the two cities are driving forces within Europe for innovation and digitalisation. We want to shape our common future in Europe: at this moment of divergence, we come closer together."

As part of the agreement announced today, Europe’s two largest tech hubs pledged to collaborate more closely to share knowledge and best practices on smart cities and the use of technology to solve urban challenges.

The two cities will also work together to promote Europe’s technology sector globally, including hosting joint meetups at important industry events such as the upcoming South by South West (SxSW) in March 2019.

Knut Hechtfischer, founder of Berlin headquartered Ubitricity with an additional office in Shoreditch, London said: “Much like Berlin, London is a hot bed for innovation. With strengths in developing smart cities technology, it was a natural place for us to expand our operation in the UK market. The creative energy and vibrancy of an area like Shoreditch is similar to the start-up scene in Berlin and it has made London feel like a home away from home for our business.”

London & Partners has led a number of trade missions to Germany recently, including visits to Berlin, Frankfurt and Hamburg. In 2017, London’s Deputy Mayor for Business, Rajesh Agrawal, led a trade mission to Berlin involving fifteen of London’s fastest growing businesses, helping them to explore investment and expansion opportunities in the German capital. Following the visit a number of the companies have successfully entered the German market including Property technology firm, WiredScore and start-ups rating agency, Earlymetrics.

William Newton, WiredScore EMEA President said: “London and Berlin are world-class hubs for technology and innovation, and the commercial real estate sector in each city is thriving. We see expansion into Germany as a great opportunity and natural fit to our growing business internationally.”

Business and technology support for companies, investors and scientific institutions in Berlin – this is the Berlin Partner für Wirtschaft und Technologie GmbH mission. With customized services and an excellent science and research network, our many experts provide an outstanding range of programs to help companies launch, innovate, expand and secure their economic future in Berlin.

A unique public-private partnership, Berlin Partner for Business and Technology collaborates with the Berlin State Senate and over 280 companies dedicated to promoting their city.