You are here: Newsroom > News > London and Berlin pledge to strengthen trade and investment links

London and Berlin pledge to strengthen trade and investment links 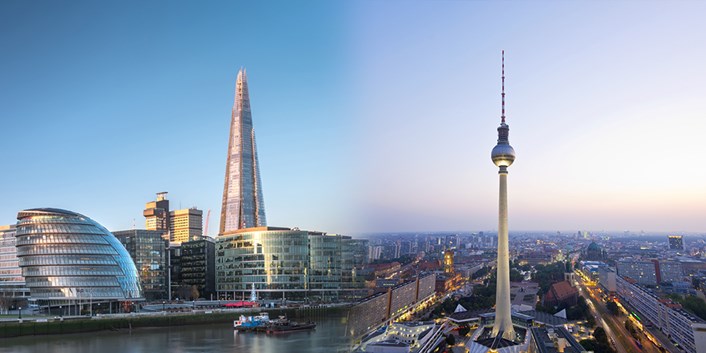 London and Berlin have pledged to strengthen business links between the two European capitals by announcing an extension of a partnership agreement signed by both city’s trade and investment agencies last year. The city-to-city agreement has been renewed to coincide with a virtual event marking the 20th anniversary of the twinning of the two cities, involving the Mayor of London Sadiq Khan and Governing Mayor of Berlin, Michael Müller.

The two City Mayors will address an audience of global business leaders, policy makers and entrepreneurs, where they will call for greater collaboration between the two cities on post-Brexit trade and tackling joint challenges such as climate change and the global pandemic.

The extended partnership will see the two city’s official trade and investment agencies, London & Partners and Berlin Partner, continue to work together to facilitate business opportunities for companies across both regions.

Both organisations will collaborate to offer London and Berlin businesses greater access to local government, investors and corporate partners offering tailored advice for companies looking to setup up or expand their operation in each city. They will target help at start-ups and scale-ups with a focus on areas of mutual strength such as smart cities, life sciences, artificial intelligence, fintech and creative industries.

London shares a strong trade and investment relationship with Berlin and the rest of Germany, with latest figures compiled by London & Partners showing that London is a leading global destination for Berlin businesses looking to establish a base outside of Germany – second only to Paris. Over the past five years, German companies have created over 5,378 new jobs and £2.1bn worth of investment for London’s economy1. Some of the largest German companies to invest in London over that time period include engineering giant Siemens and global sports brand Adidas, as well as Berlin tech unicorns, Hello Fresh and Zalando.

Germany is also an attractive destination for London companies looking to expand into mainland Europe, with latest data showing that the UK capital was the number one global source city for foreign direct investment into Germany over the past five years. Berlin is the number one city for foreign direct investment from the UK, ahead of Frankfurt and Munich.

Mayor of London Sadiq Khan said: “Our two great cities share European values of inclusivity, creativity and innovation. In light of the global pandemic and common challenges such as climate change, there has never been a more important time for us to work together. I am determined to strengthen the economic links between London and Berlin and develop exciting opportunities for trade and investment. Like Berlin, London is an outward looking, global city and regardless of the final outcome of Brexit, London will remain open to talent, investment and collaborations with Berlin and other European cities.”

Governing Mayor of Berlin, Michael Müller added: “London and Berlin have been twinned with each other for 20 years. The cooperation and exchange is of high added value for both cities and is supported and promoted by civil society and many other actors from business, culture, sport and science. It is a common concern of ours to promote the European community of values, peace and freedom in Europe. Brexit will not change that. On the contrary, our friendship will grow and the exchange will become more intensive. Where serious problems like the pandemic have to be solved, our metropolises offer incubation spaces for innovation, so that the challenge also creates opportunities.”

London and Berlin are two of Europe’s leading tech hubs, with latest data from Dealroom.Co showing that the capitals are ranked as the top two cities in Europe for producing unicorn tech companies2. With thriving start-up ecosystems, both cities have also attracted high levels of international investment, with additional research showing that London ($9.2bn) and Berlin ($4.5bn) attracted more venture capital funding than all other European cities last year3.

As part of the ongoing agreement, the two cities will continue to share knowledge and best practices on the digitisation of cities and work with the technology community to tackle common urban challenges such as air pollution and smart mobility.

London & Partners and Berlin Partner will also continue to work together to promote the European tech ecosystem globally. Since the partnership began, the two organisations have hosted a number of in-person and digital events for entrepreneurs and start-ups to build stronger links between the two cities, including a joint activity at South by SouthWest (SxSW) and a London-Berlin ‘Bridge’ event series in partnership with Berlin based start-up network, Silicon Allee.

The two cities commitment to working with the business community to tackle climate change has been boosted by the news that the GREENTECH FESTIVAL will host one of its first global events outside of Berlin in London next year. London & Partners will work with the GREENTECH FESTIVAL to enable them to host a hybrid event with a focus on green technology and green finance in the UK capital in autumn 2021. The event will see the conference element come to London, bringing together business leaders, entrepreneurs and policy makers to share ideas and find solutions to the climate crisis.

Marco Voigt, Co-founder of GREENTECH FESTIVAL said: “London and Berlin are two of Europe’s leading cities for innovation and technology, with a common goal of becoming zero carbon cities. We are delighted to host a hybrid conference event on green finance in London next year as part of our mission to inspire a global audience to create a green future. With our digital-analogue elaboration of GTF this year, we evolved despite the pandemic and our collaboration with London is an important part of our international growth plans in 2021.”

Since the signing of the of the city-to-city agreement in 2019, London & Partners and Berlin Partner have worked together to help a number of companies looking for international growth opportunities across both cities. The working relationship has been strengthened further by the presence of London & Partners’ office in Berlin. Opened last year, the staff based at the London hub in Berlin provide support for German companies looking to setup or expand in the UK capital, as well as helping London companies looking to do business across Germany.

With the support of the London & Partners Berlin office, the two organisations have collaborated to deliver a series of trade missions connecting companies with investors, corporates and other professional service firms who can provide assistance with office space, recruitment, legal services and other tailored advice for companies looking to setup in a new market. Since the global pandemic, the two organisations have also worked together on two virtual trade missions with a focus on supporting London-based fintech and creative companies looking for opportunities in Berlin and Germany.

Lawrence Leuschner, CEO of TIER Mobility, Europe's largest micro-mobility provider with teams in London and Berlin said: “We were founded in Berlin but London - where our COO and CFO are based - has become a second home, and as a business we’re the perfect example of what these two cities can achieve working together. In the last two years we have combined German design with British battery engineering, and our leadership team is now split across both capitals to great effect. London and Berlin have led Europe’s technology scene for some time and with the abundance of talent and innovation coming out of both cities, I expect this trend will continue, with exciting collaboration to come over the next 20 years.”

Knut Hechtfischer, founder of Berlin headquartered Ubitricity with an additional office in Camden, London said: "Like Berlin, London is a city where new ideas can thrive and was a natural place for us to roll out our smart electric vehicle charging solutions outside of Germany. To bring Ubitricity to London, starting to work with Boroughs, OLEV, and TfL in 2016 and 2017 and tailoring the solution to local requirements was the best entrepreneurial decision we took at Ubitricity. London has proven why it's one of the best global hubs for technology and innovation. London has been open."

Jillian Kowalchuk, Founder & CEO Safe & the City scaled their personal safety navigation technology to Berlin last year added: “Berlin and London share a culture of open innovation, social entrepreneurship and commitments to improve the safety and inclusivity of its vibrant and diverse populations. Following our success in London, Berlin’s willingness to embrace smart technologies for its citizens made it the ideal city to launch in. Within a year, we have grown our team to be based in Berlin and London, our suite of B2C and B2B technologies and social impact. This city-to-city agreement increases the confidence we can build back stronger, safer and more resilient cities.”

Source: fDi Markets, from the Financial Times Ltd as of November, 2020

About London & Partners
London & Partners is London’s international trade, investment and promotion agency. Our purpose is to support the Mayor’s priorities by promoting London as the best city in the world in which to invest, work, study and visit. We do this by devising creative ways to promote London and to amplify the Mayor’s messages, priorities and campaigns. London & Partners is a not-for-profit public private partnership, funded by the Mayor of London and our network of commercial partners. For more information, visit: www.londonandpartners.com