You are here: Newsroom > News > I kid you not: London is a playground this October half-term

I kid you not: London is a playground this October half-term 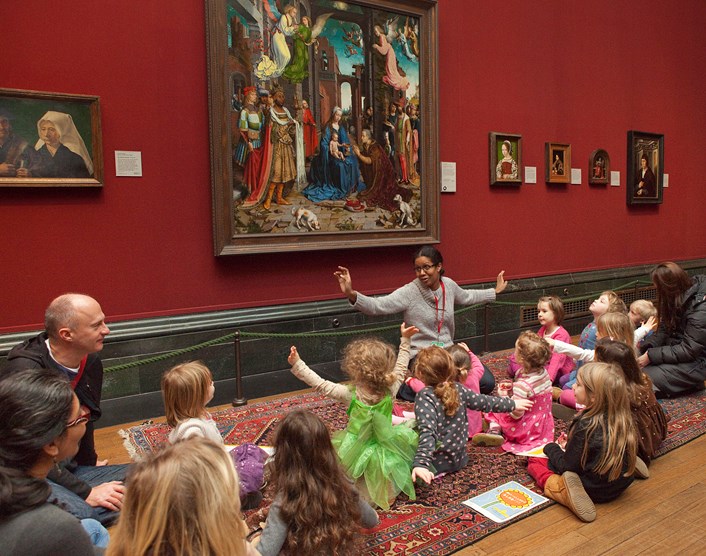 From museums and attractions to parks and restaurants, London has something to offer kids of all ages this October half-term.

Visit the capital for a day or stay longer and experience London like you’ve never seen it before. From feeding the Queen’s horses to finding Wally, the kids definitely won’t be bored!

For the arty types

Celebrate the Big Draw, the world’s biggest celebration of drawing, at the Old Royal Naval College and join illustrator Nick Ellwood for a series of themed workshops (selected dates).

Go on an art trail at the National Portrait Gallery and learn to draw as your discover the works of famous artists (daily during school holidays, free). Make a day of it thanks to the Portrait Café’s £4.95 kids lunchbox, available during half-term.

Join artist-inspired workshops designed for youngsters and their parents at the Royal Academy and get creative as you paint and sculpt a self-portrait (23, 24 October).

Learn from the best at Alexandra Palace as street artist Carleen de Sözer leads a five-day workshop in which kids will be able to design their own piece of art (21-25 October).

Learn more about the ancient art of origami with a workshop at Bang Bang Oriental, the largest Asian food hall in London (24 October; free).

Take under 5s to the National Gallery for a sensory exploration inspired by art works and led by the gallery’s early years practitioner (21 October, several sessions).

Young theatre lovers will love the specially written plays at the Unicorn Theatre, including Anansi the Spider (3-7 years-old), as well as the associated craft workshop, and Maggot Moon (9-13 years-old) (selected dates).

Get all the tricks of the trade at Behind The Scenes Magic at the Museum of London, where kids will be able to produce their own theatre show, inspired by London animals.

Introduce the little ones to books with the Southbank Centre’s London Literature Festival and familiarise yourself with tales from all around the world (17-27 October).

Educate youngsters about the health of our rivers with an investigative craft session at the Museum of London Docklands (23 October).

Hop aboard the Cutty Sark for daily musical performances inspired by the ship’s travels around the world and discover different cultures (21-26 October).

If travel is your thing, head to the British Museum for a full day of storytelling and music from all around the world (and the museum!) (24 October; free).

Animal lovers can learn more about what it is like to be a zookeeper with Grim Keepers at ZSL London Zoo, a tour which will reveal the more frightful aspects of the job (19-27 October).

Treat the kids to slimy time at the Horniman Museum with the Slime Workshops, or join the museum’s annual Halloween Fair (21-24 October; 26-27 October).

Get the kids to develop or sharpen their digital skills with Digital Kids, one of the three workshops on offer at the V&A during half-term (21-25 October; free).

Get looking for Wally at Wimbledon Lawn Tennis Club, one of the many London museums taking part in Where’s Wally? The Big Museum Hunt.

Give your visit to Eltham Palace a spooky twist with this Halloween event which features crafts, a wicked witch quest and creepy crawlies. And don’t forget your outfits!

For the delicate palates

Fans of afternoon tea will also love Tiny Tea at Bluebird Chelsea, and with Nutella-stuffed doughnuts, baby fruit scones and mini milkshakes, what’s not to like? (19-27 October)

For those after savoury treats, Mews of Mayfair is hosting pizza-making classes for children and adults alike (selected dates).

Wrap up warm and head to the iconic Ice Bar, where kids go free this half-term (one child per paying adult) and admire the Thor-inspired installation (20-25 October). Don’t worry, everyone will be given a cape and gloves, as well as a free drink! Kids even eat free at Yuu Kitchen, the restaurant beneath.

For the history buffs

Westminster Abbey is 750 years-old! Come celebrate with a family day during which you’ll find about more about the Abbey throughout the ages, meet some medieval characters and even try brass rubbing (23 October)!

Watch as the little ones become spies for Elizabeth I at Hampton Court Palace and help the Queen keep her court in order. Don’t miss the new Lost Dress of Elizabeth I exhibition (26 October – 3 November; included in palace admission ticket).

Head to Kensington Palace to meet former residents, Queen Victoria and her daughter Princess Louise. Join the kids on a treasure hunt for special objects and make sure to stop by the exhibition Victoria: A Royal Childhood to find out more about the Queen (19-27 October; included in palace admission ticket).

Find out more about women prisoners at the Tower of London and learn about their fates though various activities (19-27 October, included in palace admission ticket).

Hear about moving stories of animals during times of conflict at the Imperial War Museum (19-20 October; free).

For a breath of fresh air

Kids can get involved in interactive sessions to find out more about fungi names and follow trails to find them in Kew Gardens. You’ll be joined by experts who will be able to shed some lights on the specimens you’ll be examining (19 October – 3 November; included in admission ticket).

Pick up your binoculars and lend a hand to wildlife researchers by taking part in Migration Watch at the London Wetland Centre (19 October – 2 November; included in admission ticket).

Join experts to learn about nature in Autumn in Greenwich Park, play games and help prepare a winter home for the local fauna (23 October; free for accompanying adults).

Help the planet with Carnaby’s ZSL London Zoo pop-up experience, For People, For Wildlife. Find out more about what life is like in Nepal, take a family selfie in front of the 2D recycled card installation and contribute your spare change to help the local communities (1-31 October)

Thrill seekers can channel their inner James Bond by racing down the Thames on a speedboat with Thames Rockets (throughout half-term).

For the London lovers

Go behind-the-scenes at the Household Cavalry Museum where, for the first time, you’ll be able to meet and feed the horses, chat with the Queen’s bodyguard and take part in arts and crafts workshops (24 October, included in admission ticket).

Visit the oldest part of London by taking part in one of the many family walking trails available in the City of London. Discover the City’s history, see its iconic landmarks, spot hidden gems and tour its green spaces!

Introduce the little ones to the UK capital with the specially designed Original Kids Tour. This 45-minute bus tour takes the family around London’s major landmarks and even has a live guide onboard (19 October – 3 November).

And don’t forget that kids under 11 travel for free on the TfL network!

Visitlondon.com is the official visitor guide to London and is run by London & Partners, the Mayor of London’s official promotional agency. London & Partners’ purpose is to support the Mayor’s priorities by promoting London as a leading world city in which to invest, work, study and visit. Visitlondon.com is a comprehensive resource for everything that is happening in London. At any one time, this includes 20,000 event listings, plus content designed to inspire and assist visitors. Each month visitlondon.com attracts more than 3.5m visits and its social media channels have 1.75m followers.