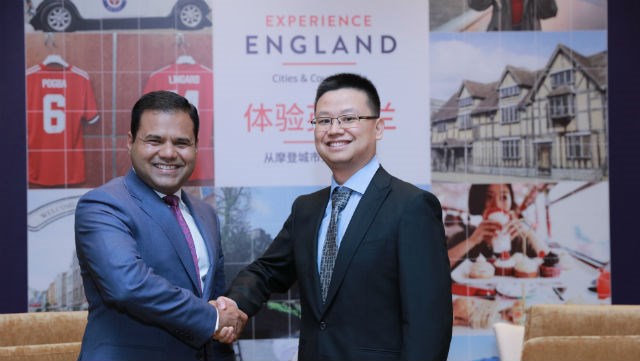 Three of the England’s leading cities have today announced a joint tourism campaign to make it easier than ever for Chinese visitors to explore England.

The project, called ‘Experience England’, will offer tailored packages for Chinese tourists looking to visit the thriving cities of London, Manchester and Birmingham, as well as trips to picturesque English villages and countryside hot-spots such as The Lake District.

The initiative will offer a seamless holiday experience for Chinese visitors, providing a one-stop-shop for flights, hotels and transport between destinations alongside a range of fixed and flexible itineraries in multiple English destinations.

The ground-breaking partnership between the three cities and Qunar was announced today in Shanghai by London’s Deputy Mayor, Rajesh Agrawal and Mr Weiping He, Chief Technology Officer and VP of Hotel Business, Qunar.

In the next decade, China is set to be the fastest growing market for overseas tourists into London, according to figures compiled by London & Partners, the Mayor of London’s official promotional agency. By 2025, the number of Chinese visitors to London is expected to increase by over 100 per cent1.

Manchester, served by two direct flights from Beijing and Hong Kong, welcomes the second highest number of Chinese visitors in England and Marketing Manchester has been working in China for a number of years representing a consortium of Northern England partners such as the Lake District, Liverpool and York promoting Manchester as the Home of Football, City of Shopping and the Gateway to Northern England.

London’s Deputy Mayor for Business, Rajesh Agrawal said: “London and China have deep-rooted cultural ties and this partnership is further proof of our special relationship. London’s world-class attractions, shops and restaurants makes our city a fantastic choice for Chinese visitors looking for a unique holiday experience. But we are also committed to working with other cities and regions across the country to showcase the very best of England’s diverse visitor offering. As the UK’s most connected city, London is an ideal starting point for international visitors wanting to explore the rest of the country.”

VisitEngland Chief Executive Sally Balcombe added: “The Experience England project inspires Chinese visitors to explore more of the country, making it easier for them to experience the cultural heritage, vibrancy and diversity of our regions and boosting growth from tourism across England.”

Mr Weiping He, Chief Technology Officer and VP of Hotel Business, Qunar added: “The recent rapid growth of Chinese tourists in England and their spending power has shown that Chinese tourists have strong potential for contributing to the growth and development of the tourism industry in England. We hope that through our in-depth cooperation with the Discover England Fund, we will promote more diversified travel products to land in China, allowing Chinese tourists to have a deeper understanding of England, stimulate interest in British travel, and travel there to experience the modern cities and beautiful countryside of England.”

The Experience England project is a joint initiative led by led by London & Partners, the Mayor of London’s official promotional agency in collaboration with Marketing Manchester and the West Midlands Growth Company (Birmingham). It will be financed by a £1.2m grant awarded to London & Partners as part of a number of successful projects to receive funding from the UK Government’s £40 million Discover England fund administered by VisitEngland and which is designed to ensure that England stays competitive in the rapidly growing tourism industry.

About The Growth Company and Marketing Manchester

The Growth Company is a UK-wide not-for-profit economic development agency that seeks to generate inclusive growth in the country’s economy by creating jobs, and improving lives. It offers a wealth of services that support growth among individuals, businesses, cities and regions. For more information, please visit: www.growthco.uk